Classical Tour of Senegal – Visit Senegal, a nation in West Africa that is located on the western coast of the continent. In the capital city of Dakar, explore the African Renaissance Monument, the Museum of Black Civilization, the portal to no return on Goree Island, Pink Lake, Bandia Park, and Saly Beach. You will be welcomed at the Blaise Diagne International Airport, helped with your luggage, and driven to your hotel in Dakar so you may check-in. You will receive a quick introduction from your tour guide on what to anticipate while you are there. Enjoy the remainder of your free time.

After breakfast, we'll start our trip with a beautiful drive through the city's heart, passing Independence Square, the Presidential Palace, and the main church on the way to Soumbedioune Market and the Mosque of the Revelation.

You will observe the distinction between the attractive residential areas and the well-known neighborhoods throughout this visit. Visit the crowded Kermel market, where women sell and purchase fish and other fresh produce, or the Tillem market, where you can buy textiles and many other regional goods.

We go to the two most visited attractions in Dakar: the enormous Museum of Black Civilization and the tallest monument in West Africa, the Monument de la Renaissance Africaine.


We drive a short distance to the harbor and board a ship to Famous Goree Island after eating lunch at a restaurant where we may sample Senegalese food and drinks. Goree Island, a UNESCO World Heritage Site, is 20 minutes from Dakar and served as a significant slave transit hub prior to their deportation to America. Visit the slaves' home and its "door of no return" after hearing the curator's talk about West African slavery in general and the situation of the slaves in Goree in particular.
Wander the streets and discover the islands while mingling with residents, primarily artisans who are manufacturing and selling various goods. Return to Dakar by boat, where our driver will be waiting to take you to your accommodation.

After relaxing, try Senegalese food and beverages at a local restaurant where you're having dinner. Drive to Pink Lake, which is isolated from the Atlantic Ocean by short sand dunes, after breakfast. This lake's pink hue results from the presence of bacteria called Artemia Salina Bacteria and the high salt concentration (380g/L), which is. This indicates that the lake is second only to the Dead Sea in terms of salinity after being 11 times saltier than the Atlantic Ocean.

In actuality, the lake's color varies from a light mauve to a deep pink due to the salt concentration, which is affected by the seasons and the quantity of lighting.

Interact with the salt harvesters while having the option to swim and float in the shallow lake.

Take a quad, buggy, or Jeep for a ride/drive to the sand dunes and coast. Eat at one of the many eateries.

We will drive a short distance to the Bandia National Park, which is located in the center of a classified forest and comprises over 2,000 hectares. Set off on a three-hour safari through a forest of Baobab and acacia trees to observe largely herbivorous wild creatures including buffalos, antelopes, impalas, gazelles, elands, kudu, giraffes, rhinos, monkeys, and zebras... Birds like little hornbills, eagles, vultures, kingfishers, and grey herons...

We'll visit a rare baobab tree for an archeological course; the Griots' grave. Griots were caste people who were storytellers, drummers, and singers, and when they died, they were typically buried inside the hollows of baobab trees. We'll learn more about these individuals from our local guide. After a drink at the tavern along the crocodile river, drive to Saly beach. Enjoy some downtime at the beach or go shopping at the adjacent artisan market or souvenir stores. Then transfer to the airport three hours before your flight. 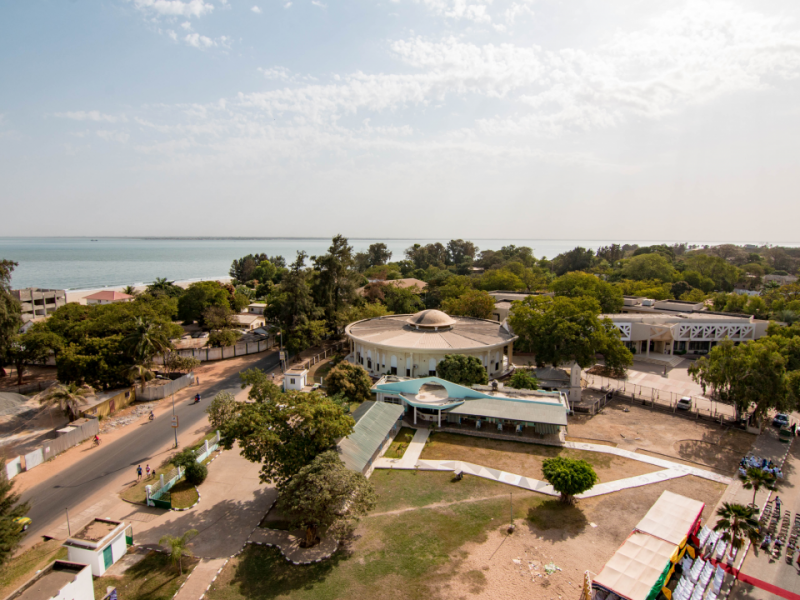 We are an IATA accredited Travel Agency and meeting planners, operating in Ghana since 2006. Africa’s Premier Travel Experts, and no one knows West Africa better than our team.