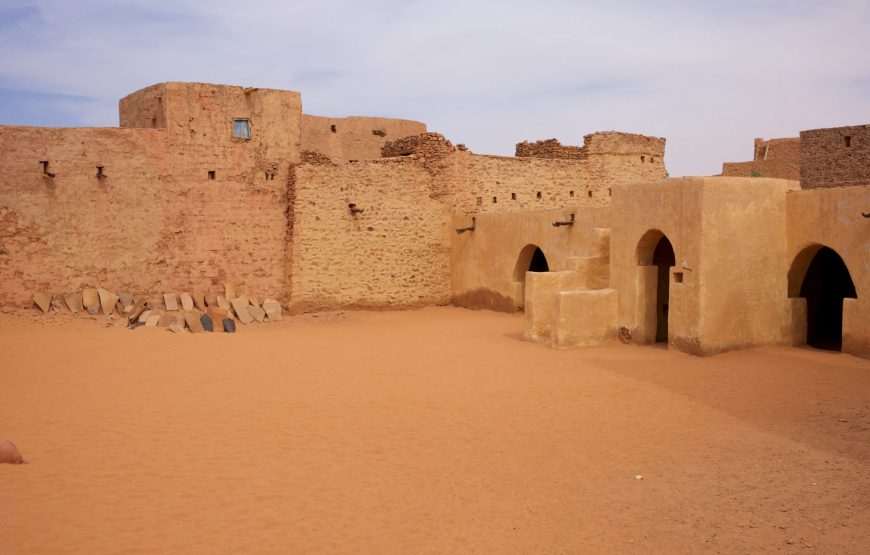 Discover Mauritania with us on this 8 Day tour. Highlights of this tour include; a visit to the capital city of Nouakchott, trekking on the big dunes to discover the desert beauty, Drive through Akjoujt to Atar, Explore the traditional quarter and the market, See vestiges of the fortress that was built in the cover of 20,000 palm trees and the mosque among a maze of rocks and many more On arrival in Nouakchott, you will be met and transferred to your hotel. Tour orientation and overnight in Nouakchott. Breakfast and begin your day with a visit of the capital city of Nouakchott believed translation from Berber “The place of the winds” and one of the largest cities in the Sahara Desert.

Visit the following places: –the craft market –the mosque with its two minarets –the National Museum with its ethnographical and anthropological exhibit. In the afternoon visit to the desert dunes, trekking on the big dunes to discover the desert beauty. The return of boats in the late afternoon is an original performance, then return to your hotel for overnight.

After breakfast, depart for Atar. Drive through Akjoujt to Atar, Mauritania’s most beautiful region, with the country’s most impressive dunes, rock paintings, stunning oases and nomadic culture. Explore the traditional quarter and the market. Overnight in Atar.

After breakfast, drive to Azougoui, the ancient capital of the Almoravids, a group of Muslim warrior monks who conquered Morocco, Spain and sub-Saharan Africa in the eleventh century.

See vestiges of the fortress that was built in the cover of 20,000 palm trees and the mosque among a maze of rocks.

Then continue to Chinguetti the seventh holy city of Islam, a UNESCO World Heritage Site. Visit the libraries, traditional quarters, and oases.

Chinguetti, meaning “Good horse”, was established in (1261). It was on the caravan route linking northern Sudan to North-Africa. This road was the main access to the gold and other products from the Sudan. This ancient city was also a center of religious and cultural influence from where Mauritanians spread Islam and the Arab-Muslim culture to the entire West Africa. Chinguetti was a cultural center where theology, poetry, philosophy and law and other disciplines were studied.

After breakfast, depart to Ouadane with a stop in Guelb Er Richat, an impressive crater, which originated from a meteorite that Theodore Monod had been searching for, for many years. Ouadane which was one of the main caravan centers in West Africa.

After breakfast, cross the White Valley to reach Terjit, the most beautiful oasis in Mauritania, where there are oasis with thermal springs and pools for bathing. Continue to Atar and rest of at leisure.

After breakfast, drive back to Nouakchott. Complete city tour by buying souvenirs or just stay at leisure the rest of day.

Today, you will be transferred to the airport in time.